Jack Newton’s story is full of dramatic moments, but they are told in a laconic Australian way that makes grim humour from disaster and takes success and failure in its stride. Written with the assistance of top golf journalist Peter Stone, it is a story that takes the reader into the excitement of tournament play, out on the course making shots in the company of the world’s best, into the locker rooms and bars and the hustling camaraderie of the professional game.

Jack – ‘the wild one’ – played major tournaments all over the world, finding maturity with his marriage to Jackie and with his children, Kristie and Clint. They were to be his mainstay when he was cut down in a horrifying accident at Sydney airport – an accident that took an arm and very nearly ended his life

From that tragedy a different Newton emerged – a top commentator, a business success across many areas, a teacher and family man, and a man of compassion who was concerned to give back something in return from his gifts. He may have regrets and even faults, but self-pity is not among them. Any way you look at it, Jack Newton’s life is an inspiration. 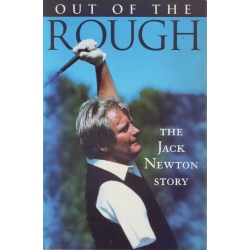